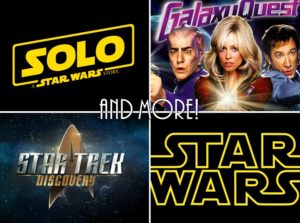 I really couldn’t figure out what title to go with – should it be the Star Wars (which we’ll be looking at) reference, or a poke at The Fast And Furious’s funny trend of just switching up its titles in confusing and funny ways (here’s to Fast 9: Furious Family). A lot of movie news has been dropping the past couple of weeks. In the wake of the Superbowl we got a launching of new trailers (which frankly is the only thing I look forward to about the Superbowl), and I finally sat down and watched Star Trek Discovery…and man did I hate it. On that note, let’s hop to it. Saddle up.

Solo – A Star Wars Story:
So this is something my buddy Mike and I talk(ed) about in an upcoming podcast – up until this week, we got NOTHING for Solo…which is concerning. Lucasfilm fired the original directors (Miller & Lord) well into production due to creative differences and brought on Ron Howard (Ritchie Cunningham for you Happy Days fans/the Arrested Development narrator) to finish the film. There was no trailer attached to The Last Jedi – which was shocking to me, as the movie was at that time 5 months out, and it just makes sense to do it (a-la Avengers: Roughly A Week of Ultron having the Ant-Man trailer) – heck, Rogue One’s teaser trailer dropped a full 8 months before the movie! To me, it was – and is concerning that we’re only getting the first trailer roughly 3 months out from the release date – yes, Star Wars will always make money – but The Last Jedi (while VERY SUCCESSFUL) was not only insanely divisive, it didn’t make as much as it debatably should have – especially in China.  The marketing decisions with Solo are both baffling and confusing. Heck, the response BEFORE any of this stuff wasn’t one of huge excitement – this isn’t a story that the fan base was demanding or calling out for (unlike say… an Obi-wan Kenobi movie). I love Star Wars, and I’m still going to see this – but outside of Donald Glover playing Lando Calrissian, there’s nothing I’m excited by in this flick – Han had a great character ark in the Original Trilogy, he had a great story – and I don’t see how you can add to it. The trailer didn’t do anything to get me any more excited either…it’s just kinda me to me. For the first time, I’m not insanely excited for a Star Wars movie. I really hope I’m wrong though, and hope y’all enjoy the trailer more than I did.

Star Wars news:
So a lot of news on the Star Wars film franchise has come out recently. Rian Johnson will be doing a trilogy not connected to the Skywalkers, constant rumours for who will get an Anthology (‘A Star Wars Story’) film always pumping out (with Boba Fett, Obi-Wan Kenobi (appearently in talks and being written), Emperor Palpatine, Ahsoka Tano, Captain Rex, Mace Windu, and (thankfully NOT Jabba The Hutt) Yoda all being talked about) and now David Benioff and D.B. Weiss (from Game of Thrones) doing a series unconnected to the Johnson trilogy and the episodic trilogies (hopefully set in the Knights of the Old Republic time). On top of all that, Disney has a number of (as-yet unknown) Star Was shows lined up for their streaming service. That’s A LOT of Star Wars. And I yet again find myself cautiously optimistic. Look, I love this franchise and it’s stories…but my worry is that this will be too much, it will get it to the point where people won’t care – and we won’t get more films again. I’m excited about new content, but I’d love it if they could space this out a bit – and take the time to focus on each project at a time (flush out the story of the trilogy, not make it up as you go). And I’m not talking a 30+ year break like we had between the Originals and the Prequels (or even the roughly 10 year break between the Prequels and the Sequels), but like a 2-3 year, at the very least between  the trilogies – absence makes the heart grow fonder, it won’t overwhelm the audience, and we could get great Star Wars content. Basically, I want Star Wars to always be great and not just another franchise. Hopefully, all this stuff will be good.

Galaxy Quest:
I watched this movie for the first time in a couple years the other day, and man is it enjoyable. Tim Allen channelling William Shatner is a joy to watch, and the late-great Alan Rickman as actor resenting being trapped in his role is fantastic. It’s a great parody/loving homage of Star Trek, and better than some of Trek’s films. If you haven’t seen it, you really should watch it – and if have you seen it, you should watch it again.

Star Trek Discovery:
To sum it up… I hate this show, and I don’t know if I’ll finish it. Roughly five minutes into the first episode I was out, and it only got worse as the rest of it and the second episode. Let me explain. There is some good stuff here, and I wanna give it credit – the lead actress (Sonequa Martin-Green) gives a great performance throughout the episodes, the soundtrack is solid, and the diversity of the show is fitting with the whole franchise. That’s about it for me. Let’s get to the bad/the frustrations. The main thing is the awful Klingons – they look TERRIBLE (AND THEY DON’T SPEAK KLINGON!!). Along with that, the Klingons have ships that don’t look like the Klingon ships of that time. This show takes place about 10 years before TOS, that is not enough time for the ships to become the ones we know. Yes, between the TOS and the movies the Klingons changed – but they later addressed and explained it, and in comparison, it wasn’t that drastic – it was something we could roll with. I hate that Martin-Green plays Spocks previously un-mentioned (for 30+ years) adopted sister – it doesn’t make any sense; we heard about Spocks other family members, it’s lazy to be like “well, not this one you didn’t”…her character could have been adopted by anyone on Vulcan, and her story would have been the same – I just don’t get this decision. The most frustrating thing though is its time placement – all this stuff 10 years before TOS is crap. Heck, if you set this AFTER the events of the intro of Trek 09 (Spock and the Narada going into the wormhole), say 20, 50, or even 100yrs down the line – it all could work (save for the Spock-sister part), I’d still hate the look of the Klingons, but you could explain that over time they changed/evolved (or something happened, etc), and the look of the ships would make sense. Or, heck, you could just do it in the Kelvin timeline and literally just say “alternate reality LOL” – and it would work. But choosing to do it the way they have is…it’s just the worst. Time to watch DS9 or TNG again.

Venom:
So the Venom trailer dropped today, and it didn’t do anything for me. In another post, I’ve gone into why I don’t think this movie will work, and the trailer didn’t do anything to change that for me. Tom Hardy looks like he’ll give a solid performance (cause when doesn’t he), but outside of that there’s not much making me interested. Hopefully it’ll surprise us (and tie in Spiderman), but I’m not finding much of a reason to be excited about this flick. Which sucks, cause I love the Venom character.

Deadpool 2 – Electric Bugaloo:
In contrast however, the Deadpool 2 trailer dropped and I loved it. I love how the Cable half of the trailer is straightforward comic book movie stuff (battle with huge consequences, I’ve seen serious things) but it get’s undercut with Deadpool playing Toy Story and working in a jab at Justice League and having to remove Henry Caville’s mustache. It’s that tone that made the characters work so well together in the comics, and it looks like they’ve captured it in the movie. Colour me excited.

*heads up for language*

And on that note, I’m out friends. I’ll leave you with this – another great video from Comic’s explained, and the fantastically cheesy and catchy theme from the bad Fantastic Four cartoon in the 90s.

^good luck getting that out of your head, although I don’t know why you would

What do you guys think of all the Star Wars news? Are you excited for Venom and Deadpool 2? Do you hate Star Trek: Discovery as much as I do? Let me know in the comments!

Hope you all enjoyed the post! Thanks for reading, and God bless my friends!

We serve a God who answers our prayers

Love Your Neighbor as Yourself