A Collection of Thoughts 7: Terror of MechaGodzilla 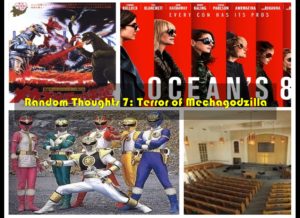 Full disclosure – this post contains very little thoughts on ‘Terror of MechaGodzilla’. It was the final flick of the original Shōwa era of the Godzilla franchise (after it there was a 9-year break before 1984’s Godzilla Returns, which started the Heisei period), and the 7th appearance of Rodan in a film. Let’s dive in.

Jurassic World Fallen Kingdom:
I’ll keep this brief, and as spoiler free as possible. The movie is better than I thought it would be and had a much more cohesive story than it’s three very different trailers suggested it would. All that being said, the movie is very dark thematically, and everyone I saw it with (myself included) left borderline depressed after. If animals in captivity can remotely be upsetting to you, you might want to skip this. It’s a very sad blockbuster, and I probably won’t end up buying it. Honestly, I needed some Community after to cheer up.

Oceans 8:
Turned out to be a lot of fun. Now I’ll be honest, my bar to clear for this one was low (it just had to be better than Oceans 12 – which isn’t hard, Oceans 12 was not a good movie at all), but I was *very* pleasantly surprised. The entire cast did a fantastic job, and it was the first time I’ve enjoyed Sandra Bullock in ages. If they were to make a sequel (again, as long as it’s better than Oceans 12) I would be on board. It’s a very fun heist movie that is well worth a watch.

So for those that don’t know, Mighty Morphin Power Rangers used footage from the long-running Japanese Super Sentai franchise – where each year you’d get a new cast, a new team, and a very different series (something Power Rangers fully embraced from Lost Galaxy through RPM).

But early Power Rangers (Zordon Era) didn’t do that. Sure, Zeo-Turbo-and In Space updated the suits/zords/powers/villains/and setting (from Ohranger, Carranger, and Megaranger respectively) – but they retained the same main cast and characters from season to season for the most part. Mighty Morphin didn’t even do that though. Mighty Morphin’s three seasons adapted Zyuranger, Dairanger, and Kakuranger – but for the most part didn’t change its cast (except when Austin St John, and Thuy Trang left the show mid-season 2 and were replaced with Johnny Yong Bosch, Steve Cardenas, and Karan Ashley), and only used the zord and some of the costumes – namely the White Ranger suit from Dairanger, and the ‘Alien Ranger’ costumes from Kakuranger. But that’s it. The main team (aside from Tommy) kept the Zyuranger costumes, even as the zords and their powers changed. Now, I get that Saban at the time didn’t want to change too much and alienate it’s (kid) audience, but still – I really dig the Dairanger suits. A big part of me wishes they had brought them into the show. Heck, they brought in the White suit, why not bring in the others. They could have done it during the Power Transfer episode, which was only like 5 episodes after Tommy got his new powers. I think it woulda worked. Someone made this intro to season 2 with the Dairanger costumes, and it totally works!

Would have been cool is all I’m saying.

While I’m on the topic, here’s a Power Rangers wish list I have going:
– More Funko pops! Namely; Lord Zedd, Rita, Goldar, The Zeo Rangers (especially the Gold Ranger), and RPM (Get In Gear!)
– Comics: The Boom studios title is FANTASTIC...and I want more. Their current Shattered Grid event is (mor)phenomenal and touches on (even briefly) every team that has been on the show, which has been great. But it (along with the upcoming graphic novel focused on Tommy after his Ranger days) has got me thinking of what other teams/characters I’d love to get a series/mini-series, namely; RPM, Zeo, a series between Zeo and Turbo to iron out all the continuity problems between the finale of Zeo and the Turbo movie (and there were many problems), Time Force, In Space, a series focused on Jason (where he was between stepping down from MMPR and coming back as the Gold Ranger, leaving as the Gold Ranger, and where he was before and after Forever Red), a mini-series focused on Rocky (a character not served well by the show – it could start in near the end of Zeo when Jason (the man he replaced) returns and out-ranks him, how he felt with being forced to leave the team, and what he did after), a series focused on life after being a ranger (focused on Zack, Trini, Adam, Aisha, Tanya, Kat, TJ, etc), and etheir a series or animated movie (or both!) adapting the original plan for the 11th season (Ninja Storm); Hexagon.

Other thoughts:
In the most recent episode of One Cross Radio, I mentioned Calvary had a wonderful video celebrating their 90th that was only on their facebook page and couldn’t be shared. They have since added it to youtube, and you can check it out here:

And this promo for Calvary’s Community Dinner from back in the day, cause why not?

If y’all have any extra money, please consider donating to 541 who do a lot for the community. They have been short on buttons recently, which they use as a way for people who can’t afford a meal to buy one. If you can, you can donate to them by clicking me, and you can learn more about them here.

And finally wanted to add two pieces of gorgeous music, one from Hook (one of John Williams most underrated scores) and a gorgeous rendition of Nearer My God to Thee by André Rieu.

Hope you all have a wonderful week! God bless my friends!

Out ‘N About 6: The sometimes frustrating Star Wars fandom