Full disclosure – there will be little to no actual deep space thoughts, though coming up with that title did make me want to watch some Deep Space Nine. And I will. Anyways, onto the post proper! 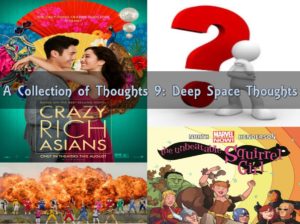 Power Rangers Aniversary Episode:
While I was on stay-cation with my wonderful wife, I got the chance to catch the 25th Anniversary episode of Power Rangers – Dimensions in Danger. And for the most part, I really dug it. There was a lot of cool stuff. Seeing Gemma/the RPM Silver Ranger (Li Ming Hu) was great since RPM exists in its own dimension, and they came up with a solid reason for her to be there. It was also awesome to see Steve Cardenas (Rocky) and Catherine Sutherland (Katherine) back, as neither have appeared in the franchise since the Turbo Movie and half-way through the Turbo season. I can’t speak to the rest of their work, but to give them due credit – the Super Ninja Steel Ranger cast was a lot of fun to watch as well, which I can’t say for other anniversary episodes (looking at you Legendary Battle and Once A Ranger). Other really cool moments were seeing the Ninja Falconzord, and of course Tommy’s new ‘master morpher’ which let him morph into 4/5 of his Ranger forms (we didn’t see the Red Turbo Ranger – and last we saw TJ had those powers in Forever Red), but most of the time for nostalgic reasons he was the White and Green Rangers – but it was great to see Zeo get a shout out too.

That’s not to say there wasn’t stuff I didn’t like. The episode was really rushed, it easily could (and should) have been a two (if not three) parter. I don’t know why it’s only one episode (probably budget), but the best team up episodes of the show were two-parters. Unfortunately, outside of this and Forever Red – the anniversary episodes haven’t been good. Maybe they should save the two-part team up for the anniversary? Anyways. The major problem with it being one episode is that outside of Jason David Frank (Tommy), Jason Faunt (Wes Collins), and Li Ming Hu (Gemma), the other returning Rangers get next to no screen time – which was a bit of a disappointment. It was exciting to see Steve and Catherine back in the show after so long – but I’m pretty sure both only got three or four lines each, and maybe 3 minutes of screen time. Selwyn Ward (TJ Johnson) got maybe two lines (I can only think of one) and less on screen time. It’s cool to see all these faces and characters back – but longtime fans want to actually see them do stuff, and not be background extras. But then again, I fully could be expecting/wanting too much from it – the Boom Studios comic has spoiled fans a lot. Stuff I didn’t like aside, I still really enjoyed this episode – and if you’re in need/in the mood for some light-hearted and multi-coloured spandex fun, check this episode out. You can also check out the awesome Forever Red in the video below:

The Unbeatable Squirrel Girl vol 1:
Now Squirrel Girl is a joke character (or started as such) that I’ve been aware of for years, who has amassed a list of high Avengers level villains she has beaten single handily (sometimes off-panel) including Dr Doom, Thanos, and Galactus (amongst others) and a couple years ago got her own series – two in one year. I’m pretty sure one was a miniseries to test the waters, which sold well, and then she got her own ongoing (vol 2). Anyways, while on stay-cation (notice a theme here?) I got the chance to sit down and read the 8 issue volume 1, and man, it’s good. It’s really funny, has cute moments, and was a page-turner for me – mostly because of the humour. This comic made me laugh more than a comic has in ages. It’s light, it’s fluffy (Squirrel appropriate), and it knows its characters – and with knowing its characters (and any of the other characters that would come in), it knows how to lovingly lampoon them. If I could liken it to anything, it was like the Lego Batman movie and Teen Titans Go! To the Movies – it was the level of lampoonery for me. Hilarity (and the right kind of ridiculousness) aside, the light tone of the book is refreshing. Squirrel Girl fights, of course, but most of the time she solves her problems by communicating, problem-solving, or even using conflict resolution…which is awesome.  It was nice to see stories be resolved in kind (and often, again, the right kind of ridiculous) and nice ways without someone being beaten half to death, or brutally killed, or sent back in time/sealed in a space prison/sent into an alternate reality (you know, traditional comic stuff). Also, gotta say, loved how un-sexualized the character was(/is). So many times in comics, men and women are depicted in insanely buff and/or busty,  with costumes that make no sense/are insanely revealing (this last part is more for the women characters than the men). Squirrel Girl isn’t like that at all. She’s not some insane fantasy character (powers aside), she’s someone who conceivably could exist. I can’t think of many real-life people who could be, say, Power Girl, but I can think of at least 8 that could be Squirrel Girl, which is pretty neat, and having someone to identify with can be important for people – so kudos (AND, they do this without making a huge or in your face deal about it, so double kudos). So if you’re looking for something a little bit different, and a lot hilarious, you should check out volume 1 of Unbeatable Squirrel Girl. Hopefully, the ongoing volume 2 will be as good. 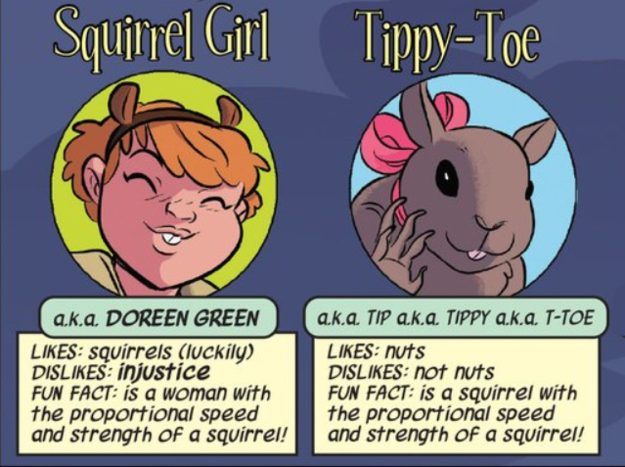 Crazy Rich Asians:
To kick off our stay-cation, Jill (my as-aforementioned amazing wife) and I on a whim decided to go to the theatre and check out Crazy Rich Asians. And I’m so glad we did. See, this is the first movie I went in blind on. I hadn’t seen an ad (which used to be easier when you didn’t have cable. but ads are up more on youtube), hadn’t seen a trailer, and hadn’t seen a spoiler-free review from Jeremy Jahns or Screen Junkies (our normal go to’s). All I knew was this was a rom-com, and apparently people really liked it; after 10mins in, I was one of those people.  This really is a throwback rom-com, and in its cleanliness (was rated PG, so no brief nudity, no sexuality, no f words…it’s nice) and heart reminded me in ways of You’ve Got Mail (my staple of the genre) and classic rom-com’s. Its story is nice and straightforward, and lightly treads on some weightier subject matter – but thankfully it doesn’t delve too deep into it (heck, I’d be all for a movie diving in on the heavier themes – it just would have been out of place). The cast did a great job, the director did a great job, and I can’t think of any complaints. Sometimes I like light and happy things. Also, special kudo’s to the music – the music in this film was fantastic, and possibly the star of it.

Ask a Pastor hopes:
So Ask A Pastor is the latest series on One Cross Radio, and I love it. It’s inspiring me to talk about and explore my Christian faith more. It’s started to light a bit of a fire under me in that regard actually, which has been great. And I have a lot of hopes for it. I’d love for it to be a way for the listeners (and readers here) a chance to get the spiritual questions of their hearts answered. Having an avenue for that if you don’t already is important. In my late teens and early 20s, I really appreciated Mark Driscoll’s (and later Matt Chandler and Francis Chan) willingness to do Q&A’s with his congregation – and he was a resource I felt I could point others to cause of how willing to be open he is. I also thoroughly enjoy John Pipers ‘Ask Pastor John’ podcast (through Desiring God) so that inspired this a bit – as did that the Lord has blessed and surrounded me with some amazing brothers (and fathers in law) who are serving as pastors. I’d love to see this series grow. So again, please, if you have any questions – email them to me.

Comments are disabled:
So lately, we’ve had a lot of spam comments. I mean a lot. In about four days there were over 100. Now spam comments are nothing new here, but unfortunately, this high volume of them is. And it’s annoying to non-bot followers who follow the comment thread to get about twelve emails with variations of the same three comments having nothing to do with the post. So, for the time being, comments are being disabled. All upcoming posts will not feature the option, and all past posts are being manually changed to not have the feature anymore. I’m hoping at some point the spam filter I have will catch the bots, I really enjoy the conversation in the comments when they happen. But this’ll be for the best. Until comments are back, always feel free to contact us by email – or if you follow our Facebook or Instagram accounts you can chat with us there!

Also, if you get a chance, listen to this Q&A from R13 with Crawford Loritts, Matt Chandler, and Mark Driscoll. I found it very interesting, and hope you will too:

Hope you enjoyed today’s post and that y’all have a wonderful week! Take care, and may our awesome God blessings be over you my friends!

Let’s Talk About – The Rise of Skywalker