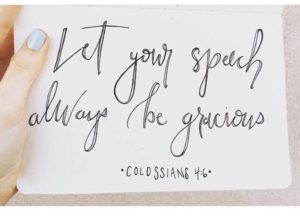 Unrelatedly, as I write this, the Zeo Rangers just teamed up with Alien Rangers (the first time Power Rangers could adapt the traditional team up from the Sentai) to fight a gear and a purse monster. Good ol tuesday morning’s on the bus. Onto the post proper.

What’s bringing this on? A couple of things, but mostly the tragedy in Florida last week. In the aftermath, people started saying harsh things across the board. Which isn’t surprising, it’s just unfortunate.

There need to be some tough conversations about guns control down there, cause clearly something isn’t working (at least in my opinion). And with tough conversations come some tough statements. But with those conversations, we don’t need to attack the other person to prove our point. It doesn’t need to be “well, you support abortion, so what you say about guns holds no water” (that’s a different talk altogether). We can still be gracious while saying tough things, but I’d argue we need to check our intent and our delivery method.

If Steve was to call me out on sin (a tough thing to do) in a one on one situation in person (or over a private message, or other certain specific situation) – that would be gracious, I need to be called out/shown where I’m in error. However, if Steve was to call out my sin on a facebook status post for everyone to see, calling me an idiot (or a libturd or conservative scum) – that wouldn’t be. If your intent is to hurt and undermine someone, you’re not showing grace – and I’d argue you’re not loving your neighbour as yourself – because the way we’re talking to others is in ways we wouldn’t stand being talked to.
Again, I’m not saying don’t have the tough conversations (about gun control, abortion, representation, ANYTHING), they need to be had. And heck, be firm, say the tough things – but do it with grace. Please pray for me in this area too, as I need to work on this.
Hope and pray this post was helpful and beneficial, and hope you all have a great day. God bless my friends!