Today’s very short post is brought to you by me wanting to talk about some wonderfully ridiculous, fantastic, dumb movies – Independence Day, Armageddon, and Volcano. 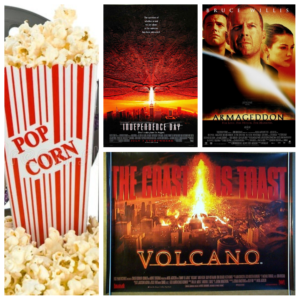 I’ll be straight up, I love all three of these movies (admittedly, Independence Day and Armageddon more than Volcano, but still). They’re big, they’re dumb, they’re ridiculous – but they’re the right kind of those things. Unlike Independence Day: Resurgence (which I didn’t hate) or literally anything else from Michael Bay, they take their story seriously – but not too much. I mean, how can you with (amazing) lines like “What are you doing with a gun in space?” and “Once again, the L.A.P.D. is asking Los Angelenos not to fire their guns at the visitor spacecraft. You may inadvertently trigger an interstellar war.”? They know what they are – pop-corn movies.

Armageddon, in particular, is a total blast to watch, because it’s needlessly intense. Its like ‘okay, it’s been 5 minutes, let’s amp up the tense music and; have an explosion sequence, or someone racing across an asteroid, or Steve Buscemi set off a rail gun (with no rhyme or reason for even being there), or other parts of the asteroid crash into itself (because it’s borderline sentient and working against them), have a shuttle crash, have a drill thing explode, have the asteroid experience earthquakes, have the president demand they detonate the nuke prematurely and a tense countdown, AND MORE. It’s stupid, half the stuff makes no sense, it has a lot of Bruce Willis shouting – it’s wonderful.

Independence Day is a fantastic watch as well. Its story doesn’t have the logic issues Armageddon does – you can follow it’s logic more, but it’s still wonderfully dumb. A 1996 computer virus saved the world cause Jeff Goldblums dad gave didn’t want him to catch a cold – that’s insane. But within the movie, that insanity works. Will Smith and Jeff Goldblum are great, the supporting cast (in all three of these movies, really) is a who’s who of the 90s supporting players. It has wonderful action set pieces, the best cheesy speech ever put to film, and is insanely quotable.

And then we come to Volcano. It’s not as great as Independence Day or Armageddon, but you know what? It’s dang enjoyable. When a volcano suddenly appears in Los Angelas, it’s up to Tommy Lee Jones (as always, acting his butt off) to save the day – that synopsis is all you need before you get your popcorn. It has a lot of great action scenes, Tommy Lee Jones being fantastic, and a solid enough story. What takes it down a couple notches is his kid – the character was just really annoying for me.

All three of these movies are great ‘check your brain at the door’ entertainment, and great popcorn cinema. They’re not movies with deep messages, or to give a lense to look at our world through. They’re for the widest audience possible, accessible by everyone – and that can often lead to an unenjoyable product. But for these three, it worked in spades.

So next time you want to just toss something lightweight on that you can have a blast watching, toss one of these on.

Unrelatedly, here’s a friendly reminder that we are on both Instagram (@2099OCR) and Pinterest! If you’re on either of those platforms, please give us a follow – and in pinterests sake, a share! Also, swing by the kofi page (hit the link at the bottom of the page) – I’ve added a video and financial goal!

Two Marvels and a DC

The Problem With Christian Media by Josh Keefe