And we’re back! So last time we looked at the four films with the crew of The Next Generation, and the time before that we looked at the three films of the Kelvin timeline. Today, we’re going to look at the six films (from worst to best) that feature the original crew of the USS Enterprise from The Original Series era of films. Let’s do this. 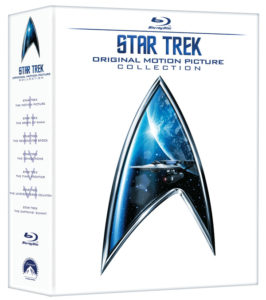 6) Star Trek V: The Final Frontier
This should not be that much of a surprise for anyone, and there’s not much to say that hasn’t already been said – this film is terrible. There’s not really anything good here – awful story, bland acting, terrible effects…it’s really bad. It is almost universally considered the worst Trek film for a reason. And unfortunately, Captain Director Kirk (William Shatner) didn’t hit whatever he was aiming for. This isn’t even “so bad it’s good” territory, this is just straight up the worst.

5) Star Trek The Motion Picture
I’ll be straight up, a lot of Trekkies and I disagree on this one. For me, Trek The Motion Picture is almost as bad as Trek V. Why? It’s just. SO. BORING! Seriously, while Trek is always talky and slow (the right kind), there’s most often a sense of excitement and adventure. This film lacks both majorly. If I was to sum this movie up, it would be “a bunch of annoyingly slow glory shots of the Enterprise (refit) moving through space”. What partially lead to this was a very troubled production that was filled with delayed effects, constant rewrites, tensions (1), and butting of heads between creators and writers and execs (2). But there were some positives out of this movie. The score (by Jerry Goldsmith) was great and gave us The Next Generation theme, and the lessons learned from the behind the scenes issues lead to much better films coming after this one (except for Trek V).

4) Star Trek III: The Search for Spock
The Search for Spock is…alright. There’s some really good stuff here with Bones going crazy due to Spock’s katra (living spirit) being implanted in him in The Wrath of Khan, the crew objecting to Starfleet orders and breaking them, and the destruction of the enterprise is very well done, and the genesis stuff going haywire is great. But for me the rest is just kinda…blah. Spock coming back is spoiled by the title and would have been a better surprise, the recasting of Lieutenant Saavik was distracting, and Kirks son (a character we just met in WoK) is killed off and it doesn’t seem to impact Kirk deeply (something that is visited in a better movie later). Overall this is a mixed bag for me and not one I enjoy as much – but unlike the last two, its one I can watch.

3) Star Trek IV: The Voyage Home
The Voyage Home has a really dumb premise. Like it’s really dumb. A satellite that only speaks humpback whale comes to earth and is destroying everything (causing geo storms and ships to loose power) because no humpback whales are answering its call (my brain hurts), so the crew of the enterprise/that Klingon warbird they stole need to go back in time and save the whales (my brain hurts more)(and seriously, with such an 80s message the movie should have been scored Wham! and its sequel should’ve been Star Trek: Recycle). Dumb premise aside, there’s a lot of comedy in the crew being back in the 80s in San Francisco – and that’s what people really like about this movie. The crew splitting up and going across San Francisco, Spock still remembering who he is, the comedy that comes from being fish out of water, and looking at what we hope mankind will become and showing it against who we were at the time (but for laughs and not preachiness) – that’s enjoyable stuff. I’ll be honest, this isn’t one I I revisit often – I just can’t get beyond the dumb premise of the movie, but I can see that it’s better made than the preceding three on this list, so there ya go.

2) Star Trek VI: The Undiscovered Country
The Undiscovered Country is my second favourite of The Original Series of films. It’s the final adventure of TOS crew – and a interesting one at that. There’s a great assassination plot, seeds of distrust, and both the Klingons and the Federation doing some shady stuff because they don’t think they should be entering peace together…and I really like it when Trek ventures into this territory. The performances are great, the special effects (3d blood excluded) are solid, and the development of Kurt hating the Klingons for killing his son in Search for Spock was a great one. It was also cool to see Michael Dorn play the ancestor of Worf (he was Kirk and Bones advocate). To be honest, there’s not anything I don’t like about this movie. A great note for the TOS crew to bow out on.

1) Star Trek II: The Wrath of Khan
Like it was going to be anything else? The Wrath of Khan is an amazing sequel. It fixes everything wrong that came in the first movie and helped make sure there would be Trek for years to come on the big screen. It had a sense of adventure and brought in a great villain (along with the Borg and Gul Dukat, Khan is the best Trek villain), we had great tense moments between Kirk and Khan (and they never actually shared a moment together in person). There’s great moral conversation about playing God through the genesis device. We get interesting new characters, an exciting plot, the gut punch of Trek, and a great score. Aside from the Empire Strikes Back, this is the model for what is sequel should be. It improved upon what came before it and set the bar/standard of quality for what was to come after it. It impacted and changed Trek for the better, and to me is unquestionably the best movie of TOS era.

Next time, we’ll be looking at what the worst to best list is for the whole film franchise.

Hope you enjoyed todays post, and God bless my friends.

The Chronicles of Narnia (the movies)