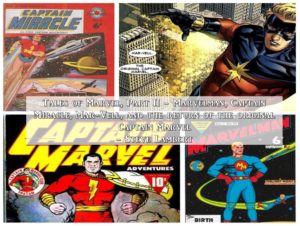 Last time, we learned the origins and down fall of the most popular superhero of the 1940s, Captain Marvel, published by Fawcett Comics.  We learned about the lawsuit that National Comics (DC before they were DC) filed against Fawcett, accusing them of ripping off Superman.  And we saw what eventually brought Captain Marvel down was a dwindling interest in superhero comics after World War II.  But we left a couple of strings dangling.  How did DC come to own Captain Marvel?  Where did Marvel Comics’ Captain Marvel come from?  And why in the world did I tell you that L. Miller & Son published reprints of Captain Marvel in Britain?  Well, buckle up, because this is where the story gets twisty!

Until 1959, British law didn’t allow for imports of American comics to Britain, the only way the British population could access American comics was if they were reprinted in Britain by a British publisher.  Publisher Len Miller made his living reprinting Fawcett comics in black and white for Britain through his company L. Miller & Son.  When Fawcett closed up shop in 1953, Miller was left without a business.  So what did he do?  He made their own ripoff of Captain Marvel.  In 1954, just months after Fawcett cancelled Captain Marvel and shut down, L. Miller & Son hired writer and artist Mick Anglo to create Marvelman.  Young newspaper reporter Micky Morgan meets an astrophysicist who grants him atomic power to fight against evil.  When Micky says Kimota (Atomic backwards… with a k) he is transformed into the atomically powered Marvelman.  So yeah, CLEARLY a ripoff.  But they got away with it.  Neither National Comics (DC), nor the now defunct Fawcett Comics felt the need to sue L. Miller & Son for copyright infringement.  This is probably because Marvelman was mostly localized to Britain and never had the same popularity as Captain Marvel.

Mick Anglo continued to write and draw Marvelman for L. Miller & Son until 1960.  At this point, Anglo and Miller had a falling out and Anglo left.  Both parties claimed to own Marvelman and both continued to publish Marvelman stories (although Anglo renamed him Captain Miracle).  Anglo’s publication company went out of business a year later, and Miller’s folded two years after that.  The reason?  The laws of the land changed to allow American comics to be imported.  When this happened, the British market was flooded with colourful superhero books and the black and white tales of Marvelman/Captain Miracle couldn’t compete.

But wait, hadn’t superhero comics had fallen from favour?  Yes, they had, but that only lasted about six years.  In the mid-1950s, comic books came under a lot of criticism for corrupting the youth of America (another interesting story for another day!)  The comics code authority was created to censor comics and regulate their content.  As a result, comics companies were forced to make their publications more family friendly.  Crime and horror comics took the biggest flack, and the complaints weren’t all unfounded – they could be quite violent and gory.  So in 1956 DC comics decided to revamp one of their old retired superheroes, the Flash.  The new Flash premiered in Showcase #4, a completely different character with a different origin and a more “modern” looking costume.  This new Flash was a success, which of course led to revamps of more of DC’s characters.  It wasn’t long before the newly renamed Marvel Comics jumped on the bandwagon with their own new heroes.  The silver age of superhero comics had begun.

In the midst of this superhero renaissance, the copyright that Fawcett Comics owned on the character Captain Marvel lapsed.  Under the US Copyright Act of 1909, creators owned exclusive rights to their intellectual property for a period of 28 years, after which time the copyright must be renewed.  The defunct company didn’t renew their copyright for Captain Marvel because they had promised never to revive him in their settlement with DC in 1953.  This left the name Captain Marvel open for others to move in and poach it.  And that’s exactly what happened.

The first was in 1966; a small comic publisher called M.F. Enterprises published their own Captain Marvel comic, starring an alien android who fought crime.  However, this series only lasted a year before it folded.  The very next year, Marvel Comics debuted their own version of Captain Marvel in Marvel Superheroes #12, written by Stan Lee and drawn by Gene Colan.  Marvel then filed the copyright on their new character.  Captain Marvel is an alien warrior named Mar-Vell.  He is sent to earth by his race, the Kree, to spy on the planet, but comes to respect humans and defects to earth to protect them.

At least they only really used the name, right?  It’s a completely different character.  Well, yes and no.  There are more similarities than initially meet the eye.  Although Mar-Vell’s powers changed several times through his publication history, his main power set is the same as the original Captain Marvel (super strength, flying, invulnerability).  Also, where the original Captain Marvel had Mary Marvel, Mar-Vell had Ms. Marvel.  In an adventure with Captain Marvel (Mar-Vell), US Airforce officer Carol Danvers gets caught in an explosion from a Kree device, which changes her DNA to be half Kree and granting her superpowers similar to those of Captain Marvel.

Perhaps the most striking similarity between the two Captain Marvels developed when writer Roy Thomas gave Mar-Vell a teenage sidekick, Rick Jones.  The two characters became linked in such a way that they shared molecules.  Because of this, only one of them could exist in earth’s dimension at any time; the other would be trapped in the Negative Zone until they switched.  When Captain Marvel was needed, Rick would clash the nega-bands together and Captain Marvel would take his place (Nega-bands are alien bracelets that access the energies of the Negative Zone of course!) This intentional twist on the original Captain Marvel was short-lived, but showed that the creators were absolutely aware of the connection between the two characters.

Meanwhile, in 1972 DC comics licensed the rights to the original Captain Marvel and his supporting cast from Fawcett Comics.  They published the book under the title Shazam! because Marvel owned the copyright to Captain Marvel, but the character retained his name.  In 1991, DC bought the rights to Fawcett’s Captain Marvel outright and Captain Marvel became officially became the intellectual property of DC.

Some of my favourite videos from Comics Explained (short post)