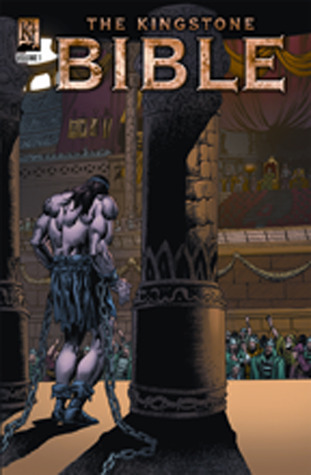 I’ll be honest, there isn’t much I don’t like about this graphic novel adaptation of the bible – it’s one I want to finish collecting at some point. This volume it focuses on the beginning (the stories of Creation and the fall, The Flood, and Babel in Genesis), Moses, Exodus (14:5 – Joshua 5:12), Esther, Samson, and Elijah.

The thing I enjoy most about this adaptation is its accessibility: it is straight up evangelical, and on a surface reading it is not catered to a certain denomination or theological group (it’s not trying to be exclusive with Arminians or Calvinists). Heck, it’s not even based on a certain translation of the bible – which is GREAT (as much as I love my ESV, it’s not everybody’s go-to), it does it’s best to adapt and interpret the Word. The dialogue of the scripture is very accessible – it’s not all “thou-est” and KJV-ish, nor is it using any modern slang/terms that would take you out of that time period – which is necessary (as much fun as it is to imagine Moses going “oh snap!”, it would be out of character and take you right out of the story), and effective in keeping you involved. There might be points where you disagree with the dialogue – but I think that’s more based on how you’ve read the word for most of your life (for example, I never pictured Elijah going ‘ha-ha’ with the prophets of Baal – so that stood out to me, but heck, it could have happened, and I probably would have been laughing the whole time in that scenario), and not anything that takes away from the story and diminishes scripture.

The art is top shelf as well – it’s very impactful. It doesn’t skirt around the violence nor does it go into Passion of The Christ territory. It doesn’t hide blood or injury, people look scared in the flood – but it doesn’t dwell on those things either. For me, that was a big part of what I enjoy about this book – it finds the right balance in tone. The art is also great in depicting the locals and the people. Nothing looks cheesy here. The artists put in their work.

To me, this (and many other things from Kingstone Comics) is a work of passion.  They wanted to accurately translate the Word to the comic medium, and it nails it. Too many times in Christian works has something been done lazily or cheesily (ie slapping Jesus name on a coke-logo). This isn’t that. It takes the stories of the old testament and doesn’t sugar-coat them. It doesn’t rush the art. It is a well made, well-adapted work. It comes down to this; I love comics, and I love the Word. I am beyond thrilled that the publishers at Kingstone have created a way for the Word to be engaged in that medium, and I look forward to further collecting their volumes of the bible.

Thank’s for reading, and hope you have a great day. God bless my friends.

A Chat With Pastor Steve Lambert