Thoughts around the Deadpool movie

So for those of you who may have missed it, a film based on a marvel comics was released about a week or so ago. A film that has an R rating for strong language, violence, and graphic nudity. And for some reason people have been surprised and offended when an R rated film (which in almost every trailer said ‘do not bring your kids’) had the things that it said it had. What’s been interesting about this has been the fall out – as Deadpool has lead to what I feel are some great and needed discussions.

One of those is that if nothing else this is a reminder to parents – especially Christian parents – to be a lot more hands on in checking out something before they send or take their children to it. As I read through the comment sections from some Christian sites with articles about the film, I was genuinely caught off guard by some of them, but two stood out in particular; “It’s a superhero movie, so I figured ‘oh a fun night of popcorn with the kids’ and off we went” and “I read the comics. Deadpool has a daughter and would do anything for her. He’s a good person, and this movie doesn’t reflect that”. Because to the first comment(or), I’m wondering why the person didn’t do a quick solo/kidless youtube search – as the red band (which should/would have been a red flag) trailer would have been one of the first things to pop up – or even a quick search (google, wikipedia, etc) in general, because EVERYTHING in the marketing for this movie has made it clear ‘we are R rated and not family/child friendly’. To the second comment(or), again, a quick search begs to differ. I’m a huge comic book fan and reader, and one of the comics I do read is Deadpool – I’ve been a fan for awhile. And one of the things the comic has constantly done is make it clear he isn’t a good person or a hero. Yes, at times he does do the right thing – but he’s a mercenary for hire, kills everyone except children, lusts excessively, and anytime he does try to be a traditional hero (in the Spiderman mold) it goes catastrophically wrong. I find him to be a great and interesting character, but he’s not a good person – and the film nailed him. Now I’m not saying you should read every comic based on a superhero so you can say yes or no to children (or even yourself) seeing the movie based on that character, but just do some quick search and this stuff would have come up. Please. I know I will be when I have kids. 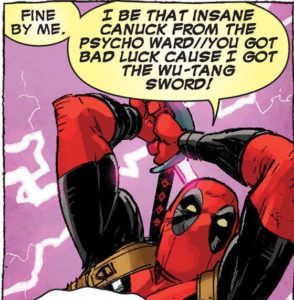 The second, and dare I say better thing that came out of this is the conversation it is forcing to happen about discernment – which is something we as Christians NEED to have. Now I’ll be honest, up until the friday Deadpool came out my wife and I were planning on seeing it (like I said, I was a huge fan of the character). However – that day two coworkers told me they had seen it the night before, and I may want to steer clear. When I asked why they said ‘well dude, to be frank, it’s too sexual’ – and one of the coworkers said ‘I have no problem with nudity or sex in a movie, but it was too much for me’. At that point I went from 100% going to see it to 80%-20%(not – going). I’ve had struggles with pornography for most of my life, and I don’t need anything triggering anything – this is the main reason I never got into and steer clear of Game of Thrones. So as I was trying to figure it out and pray through it – cause I really wanted to see this movie – I randomly logged onto facebook, and saw an  EXCELLENT article/blog post (<—click that to read it)  posted by a pastor friend of mine about viewing movies with nudity and sex – and after that it was a done deal, it was 150% ‘not going’ – because when it comes down to it, as good and as funny as it may be – I do not need to see someone who is someone else’s wife or husband in the way they were only meant to be seen by their wife/husband. There are good quality things that don’t feature that material that I could watch instead. The whole thing that came out of it was a experience with the Lord in discernment.

And the final take away is that we need to get a lot better at showing grace with those who disagree with us, especially on the internet. Again – reading through comment sections, you come across A LOT of hate and condemnation – sadly, from Christians – people saying things they would not stand to have said to them. I’ve said it before and I’ll say it again – there is a way to call out our brothers and sisters (as laid out in Luke 6:37-42 and Matthew 18:15-20) and on facebook/twitter/myspace or whatever isn’t part of that, especially with the attitude that comes across.

Perhaps off line is the best way to engage in those conversations – and if you are gonna address something online, especially if it’s a hot button issue at the time – do it on a blog post, with a video – so we can see and hear your concern and love – cause that doesn’t always come across in 140 characters and hashtags.